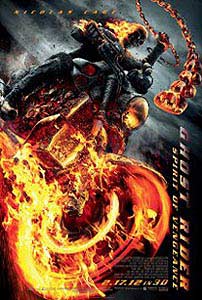 Iloura is a creative studio. A collective of artists and technologists that make and enhance creative content for film and television productions, commercials and the ever-evolving world of experiential and interactive media. They have specialised in 3D and character animation, 2D VFX, and on-set VFX supervision and motion design. Iloura’s advertising services further extending to colour; experiential ideation, events and immersive experiences; offline/online editing, and sound and music design. Iloura has a combined team of 120 people including animators, designers, editors, producers, technologists and interactive experts.

The studio has honed its visual effects crafts on international feature films like Ted, Emperor, Ghost Rider: Spirit of Vengeance, The Pacific, Don’t Be Afraid of the Dark and Charlotte’s Web. This has provided an extraordinary opportunity to build talent, expertise, and R&D that assists them to make any idea possible across any screen.

In the Ghost Rider 2 movie, there are many shots that required realistic CG fire. Was FumeFX your first choice for this project?

During the pitching phase of the project, we did a lot of research looking at other options for realizing flame and smoke. Our FX team lead by Paul Buckley and Glenn Melenhorst, was at the time primarily using 3ds max for effects, it was somewhat of an obvious solution to choose FumeFX due to our familiarity and experience using it. We knew due to the magnitude (around 400 effect shots) of the task ahead of us, FumeFX was one of the strongest available tools on the market for the job at hand and it had the speed, detail and artist friendly framework we needed.

How is the Ghost Rider 2 character different from the one we saw in the first Ghost Rider movie?

Iloura wasn't actually involved in the first film, so for us it was like a fresh start being able to reimagine the Ghost Rider in the way the directors (Brian Taylor and Mark Neveldine) envisioned him. In this film, Ghost Rider had much more of a visually darker and gritty look, which was a creative choice by the two directors and the studio. This time around, he had a charred black skull, bubbling jacket and Nick Cage got to perform GR - which certainly added to the crazy nature. For this film, there were also certain aesthetic changes in regards to the look of the skull fire and thick black oily smoke (whereas the first film had no smoke at all) and his jacket was almost smoldering and this all achieved in 3D.

What did it take to bring the Ghost Rider’s flaming skull to life?

After the shots are tracked, animated and published from Maya, they are brought into Max using our shot builder and pipeline tools. Our lead FX TD on the job, Jordan Walsh, made a series of scripts and tools to easily build shots and streamline the shot generation process. Upon shot creation, necessary geometry and animation would be imported along with proxy collision objects. Scripts would generate bounding box FumeFX grids (with enough room either side of the skull and enough height, based on the movement of the skull) and also create sources for FumeFX based on a bunch of presets created during the RnD period. A group of preset RPM render layers, visibility sets, mattes and passes were also generated. Basically setting up a flaming skull shot was unbelievably straightforward, and artists had pretty much everything they needed - all that was required was tweaking and the artists didn't have to worry about the logistics of data. They were able to spend time on the look and behavior of the effects. We also had a massive library of FumeFX presets which artists contributed to during the course of the project, as an on-going RnD process.

One of our most valuable tool written by Jordan was ‘fumeline’. It exposed all the different values within fume and let us set off multiple variations of the same simulation to the farm, and then do quick preview renders for comparison. We were able to look at a simulation with 1.2, 1.0, 0.8 time scale and 0.5, 0.4 smoke buoyancy which would generate six different simulations (each with a combination of the values). We found the preset FumeFX settings were a great starting ground, but depending on the performance of the shot it still required lots of manual tweaking and a process of going through a lot of iterations.

What was the most technically difficult shot and how did you setup the workflow?

One of the bigger shots in the film required 100+ FumeFX simulations. This was a top down disintegration shot where Ghost Rider swings his chain around and 100 or so monks disintegrate and combust. All of the monks animation, robe cutting, simulating and disintegration was done in Maya and imported into Max. The geo had custom attributes generated from Maya that detailed the frame in which they made contact with the chain, and they also had corresponding RGB maps that had a spreading texture running over them from the chain impact to the rest of the body. Scripts were used once again to automatically generate, name and distribute FumeFX grids, create emitters, select corresponding geo and emission maps. Because of the scale of this shot, it took a while to simulate all of the monks, render them, review it and iterate. It’s one of those instances where you can't really judge the shot until you have it all together and of course this took time to get right. Another issue we faced in this shot was due to the fact we had so many FumeFX grids, we were constantly hitting memory limits and we had to render them out in stages and passes, and do some comp trickery to get them all fit together. Luckily we could separate elements and try to layer passes up that way.

The "Hell Truck" and the "Hell Crane" shots seem very complex. How were they done?

The ‘hell truck’ was quite straightforward. Throughout the film we used combinations of static grids and scenes (inversed transforms) to simulate movement in conjunction with wind, which was the case with the truck. Lots of static pre-solved simulations that used wind to simulate travel were parented to a static truck. There were also a few simulations per shot that had to be done, but for the majority of it, surprisingly, we used a library of pre solved and designed effects. The initial ignition shot of the truck was the only one where all the simulations were timed and simulated specifically for that shot.

The ‘hell crane’ was some of the more impressive work done on the film, we had two artists who pretty much oversaw all of the FumeFX simulations in those shots. Due to the scale of the digger, most of the fume grids had to be quite large due to the fact the digger was moving around so quickly and was constantly on fire. We got quite close to the effects so the quality needed to be able to hold up. Most of the simulations had to be simulated with the animated digger on a shot by shot basis. Digger shots had as many as 30 simulations per shot, rolling tread fire and smoke, contact dust, frame fire, raining fire, and the main wheel plus random explosions and many many more FX passes to wrap it all up and add to the drama.

Can you point out some good sides of FumeFX that helped you to achieve all those effects?

I think the biggest strong point was that the team at Iloura working on the effects were very familiar with FumeFX, and all the effects artists we got in, were all FumeFX experts. Staff friendliness and quality were our major concerns when working with FumeFX. Being able to quickly iterate, the robust nature and amount we could push FumeFX to obtain a high level of detail was invaluable. Also none of what we did would be possible without the extensive scripting possibilities.

What are you current/future projects and plans?

Since completing ‘Ghost Rider: Spirit of Vengeance’ we brought ‘Ted’ to life in Seth MacFarlane’s first feature film, in conjunction with Tippett Studios. After completing Ted, we delivered Peter Webber’s World War II epic feature ‘Emperor’. Currently the studio is in the midst of running two projects concurrently - M. Night Shyamalan’s ‘After Earth’ starring Will and Jaden Smith and Stuart Beattie’s ‘I, Frankenstein’ It’s a busy year ahead of us here at Iloura, but we’re excited about the upcoming projects!

Thank you very much for the interview.